Excuse my language, but my second tour on a 4,000-metre peak in the Swiss Alps was a real torture at times. The reward for 11 hours of hiking on rocks, glacier and snow: majestic views and not least a little pride in yourself.

After we climbed Allalinhorn last year (see blog post: My first 4,000-metre peak), we wanted to raise the difficulty slightly and do Weissmies this year, allegedly one of the most beautiful tours in the Pennine Alps. But due to difficult (i.e. icy) conditions on the summit, we had to change our destination to Strahlhorn, a significantly longer hike at a higher altitude. It is technically an easy tour (no real climbing involved, only a bit of scrambling), but you do need a good level of fitness to take on this challenge. Which I apparently don’t.

The last time I had to endure physical strain like this was in Officers’ School in the Swiss Army – when I was 18 years younger and weighed ten kilograms less;-) I soon realized that the motto of the Officers’ School, perfer et obdura (endure and be tough) also applied to our alpine tour!

From the village of Saas-Fee in the canton of Valais, Switzerland, we took the aerial cable car to Plattjen on 2,570 m. A 2,5-hour acclimatization hike took us to Britannia Hut of the Swiss Alpine Club SAC where we met our professional mountain guides Beat and Alain from Active Dreams Mountain Guides Weissmies. The food in the rather expensive hut (CHF 77 per night incl. half board for non-SAC members; no running water) was surprisingly good – but don’t expect to sleep well in a crowded dormitory at 3,030 m. Wake-up call at 2.45 am on Sunday! Unpleasantly, the tour started with a steep descent and, after a short walk on Hohlaub Glacier, a first crossing of rocky moraine hills. This was followed by a nice, but very long and ever steeper ascent over the Allalin Glacier (with crampons and secured by ropes). Shortly before and after the Adlerpass at 3789 m, each member of our rope team struggled with his or her personal crisis. My knee hurt so badly that I would not have made it to the summit without pain killers. If at this point anyone would have suggested to turn around the others would probably have agreed.

Fortunately noone did. 6 hours and 15 minutes after we started in the dark, we reached the peak just a few kilometers from the Italian border at 4,190 meters above sea level at 10 am. Spectacular panoramic view were waiting at the summit cross. 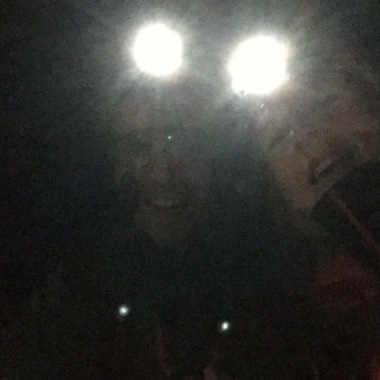 The early bird catches the worm: My wife Corina and I 6 hours before we reached the summit.

Our group of 7 was split into two rope teams. A few meters under the summit we united for a group photo. 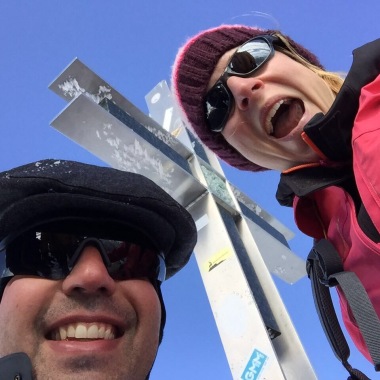 We made it! My wife Corina and I at the summit cross of Strahlhorn at 4,190 m.

We jumped over some 50 crevasses of the Allalin and Hohlaub glaciers.

The Strahlhorn tour is by far not accomplished yet on the summit. On the contrary, it is the neverending descent that put our perserverance and morale to the test. On a slightly different route than during the ascent, we had to find our way through a labyrinth of crevasses in the lower section of the Allalin Glacier, cross an even bigger field of cliffs and screes between the two glaciers and master the slope back up to the Britannia Hut where we arrived after 3 hours and 45 minutes from the top. And if that were not enough, an extra 1h 15min down- and uphill climb was required to get to the cable car at Felskinn.

Our mood was downbeat. But this feeling soon gave way to pride on our common achievement. In summary, climbing a 4,000-metre peak is an exciting adventure. However, unless you are in a very good physical condition, you may want to do an easier tour than the Strahlhorn.

Date of tour: 29 – 30 July 2017
We stayed at the Britannia Hut of the Swiss Alpine Club SAC (no other option available).
Featured image on top of this blog post: Our rope team during the ascent to Strahlhorn at the height of Adlerpass