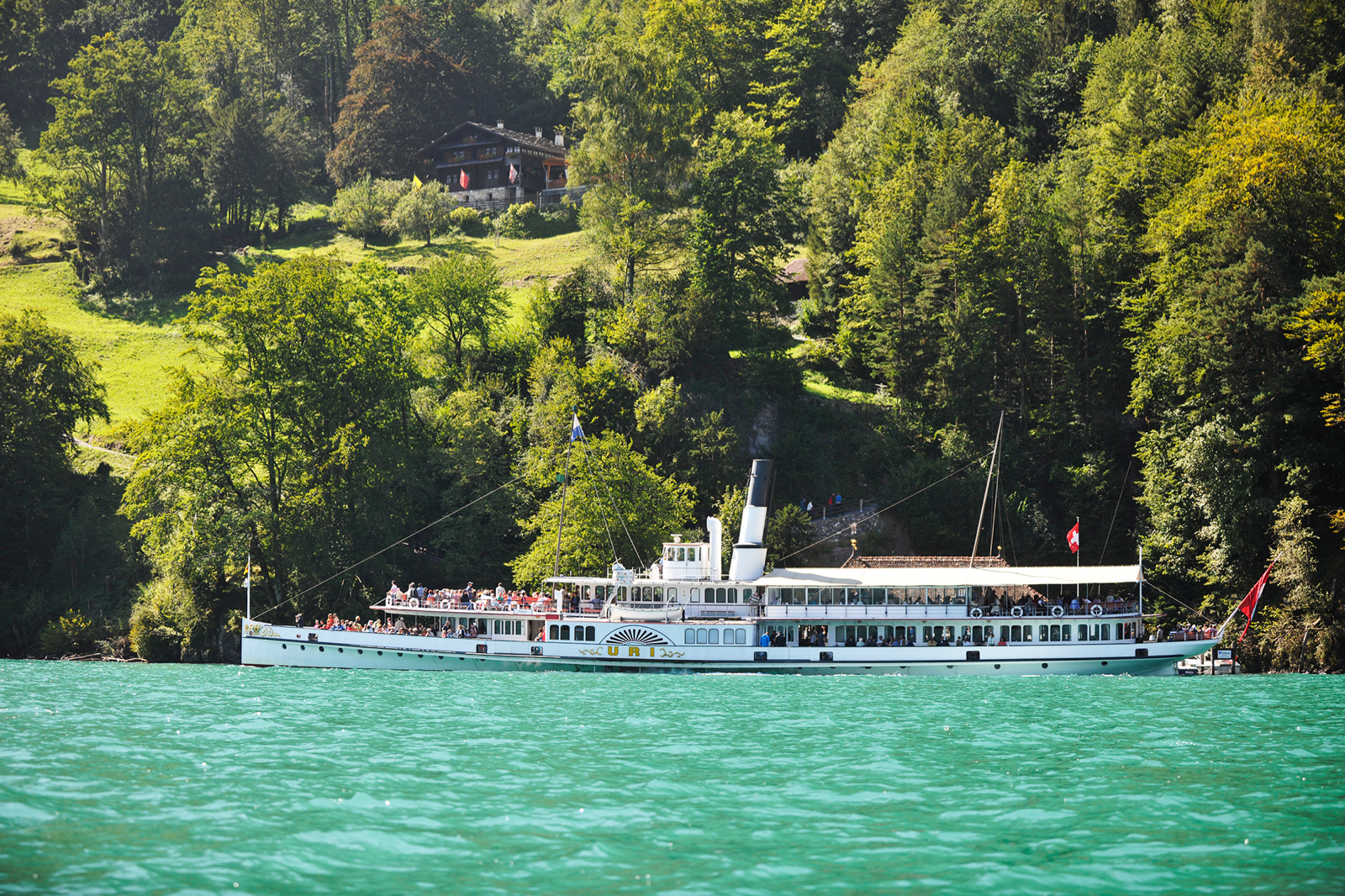 A business trip in mid-September to the Swiss canton of Uri made me discover a few remarkable locations – and rediscover a few that I have appreciated since my youth. If you like lakes and mountains (who doesn’t?), you will like Uri without a doubt.

I have three favorite spots in the small but fine canton of Uri in Central Switzerland: Lake of Uri, the Devil’s Bridge in the Schöllenen Gorge and the ski runs on Gemsstock overlooking the up-and-coming resort town of Andermatt.

If you have time, treat yourself with a steam boat trip on beautiful Lake Lucerne from Lucerne down to Uri. It is absolutely worth the 2,5 hours – the views on the shores and into the mountains are absolutely stunning. Urnersee (Lake of Uri), the southernmost part of Lake Lucerne, hosts some iconic spots important to Swiss history/mythology like the meadow of the Rütli, traditional site of the founding of the Swiss Confederation, or Tellsplatte (Tell’s slab) where according to legend (and Friedrich Schiller’s famous play), William Tell leapt from the boat of his captors and escaped, allowing him to assassinate the tyrant Gessler and initiate the rebellion that led to the foundation of the Old Swiss Confederation. Restaurant Oberaxen, accessible only by foot or aerial cableway from Flüelen, offers the best views on Lake Uri.

…into (literally!) the mountains

The history and identity of Uri is closely tied to the Gotthard Pass, one of the most important north-south axis in Europe. During our business trip in September, we were given an exciting and interesting guided tour by one of the main engineers of Switzerland’s centennial construction project, the Gotthard Base Tunnel. Opened in June 2016, it is the world’s longest and deepest traffic tunnel with a length of 57 km (35.5 mi) and trains operating at a maximum speed of 250 km/h (160 mph)! After picking up a protective helmet and an emergency respiratory kit, visitors are driven in a minibus through the access adit in Amsteg into the Gotthard Base Tunnel. Nothing for  people with claustrophobia! The “old” Gotthard Railway will remain in service for regional and touristic traffic after the new Base Tunnel will commence full service in December 2016. Therefore railway enthusiasts can continue to admire the famous double loop railway spirals inside of the mountain, which allows the church of Wassen to be seen three times from different perspectives.

To drive up to Andermatt and the Gotthard Pass from the Reuss Valley with the motorway (leading to the Gotthard Road Tunnel), you have to pass the narrow Schöllenen Gorge enclosed by sheer granite walls. According to legend, the people of Uri asked the Devil to build a bridge across the Reuss river. I love this spot for its exciting mix of mythical stories, spectacular landscape, the noise of the river and the exposure to the through traffic. The best best way to get a good view of the gorge and the Teufelsbrücke (Devil’s Bridget) is to walk along the Schöllenen circular trail (30 min). Alternatively, you can make a brief stop on the parking lot of the nearby restaurant and enjoy the views from the road bridge above the stone bridge. At the bridge, there is also a large monument to the Russian General Alexander Suworov who defeated Napoleon’s forces in 1799 at the Schöllenen Gorge.

If you enter Andermatt, keep an eye open for the Aurora gas station featured in the James Bond movie “Goldfinger”. The showpiece of Andermatt is without doubt the luxury hotel The Chedi Andermatt that opened in December 2013. It is the core of a development project by Egyptian investor Samih Sawiris that will expand the previous sleepy town into an up-and-coming ski resort. The Chedi was recently awarded “Hotel of the Year 2017” by GaultMillau Switzerland: “A lifestyle hotel with a fascinating architecture. Restaurants with seductive Asian touch. A spa with 35-meter pool. An 18-hole golf course just outside the door”, GaultMillau writes. During our business trip in September, we used the meeting facilities of The Chedi. For the hotel accommodation, we switched to more economical alternatives (the nice and modern Hotel Crowne in my case). But at least we enjoyed an tour through the elegant and stylish Chedi. My personal highlight was the five-metre high walk-in cheese cellar/tower (see image in slide show below).

The best parts of Andermatt in my view, however, are its beautiful ski runs. Since my youth, I have particularly liked the Gemsstock. Despite the shady location and the aging infrastructure (Sawiri’s development project is supposed to change that), I love the ski resort for its perfect snow quality, high snow reliability and the steep, challenging slopes. For more sun and “family-friendlier” slopes you have to go to the Nätschen-Gütsch section of the ski resort on the other side of the town or – even better – across the Oberalppass to Sedrun in the canton of Graubünden (Grisons).

Date of visit: September 12-14, 2016 (blog post includes elements of earlier trips).
We stayed at the Hotel Crowne, Andermatt (recommended).
Featured image on top of this blog post: Steamboat ‘Uri’ in front of Rütli meadow on the shores of Lake Lucerne (photo: Schifffahrtsgesellschaft Vierwaldstättersee)

Processing…
Success! You're on the list.
Whoops! There was an error and we couldn't process your subscription. Please reload the page and try again.

#ThrowbackThursday: Can you get to know a city in just five and a half hours? No, of course not. But should you give it a try anyway when it is the only opportunity to squeeze a visit into your itinerary? Absolutely! That explains why I made a flying visit to #Oslo @visitoslo, the capital of #Norway @visitnorway, in 2016.
#ThrowbackThursday: Three years have passed since I last made my annual #citytrip because of the pandemic. The destination was #Porto @visitporto 🇵🇹 - in the picture the view from our AirBnB apartment on the Ponte Dom Luís I and the river #Douro. In two weeks, the next trip can finally start - it's to #Sarajevo @visitsarajevo.ba. Follow me for many impressions from the capital of #Bosnia and Herzegovina 🇧🇦
Mercado dos Lavradores (farmer’s market) is a must-see attraction in #Funchal, #Madeira. Yes, there are some tourists there. But with the colourful fruit displays, the busy fish hall and the building worth seeing (the #ArtDeco-style architecture and typical Portuguese ceramic tiles), it is well worth a visit!
#Foodporn from #Madeira @visitmadeira.